Sorry, no results were found.

Sorry, no results were found.

We all know that the holiday season is the busiest time of the year for online retailers. While there are numerous stats and studies released each year around ad performance in November and December, there is a lack of useful data available surrounding what happens after the dust has settled on the holidays. We decided to investigate and this is what we discovered…

Based on data analyzed from the 2010 holiday season, we found that daily click-through rates (CTR) in January were 14% higher than over the holiday season. Drilling deeper, the data revealed that there was a slight decline in CTRs in the first week of the year, but beginning the second week in January, performance rebounded strongly — up to 36% above the holiday season baseline.

The increased performance across Undertone could be attributed to New Year sales offers or possibly the need to exchange holiday gifts, but either way, performance in January surpassed that from the holiday season. 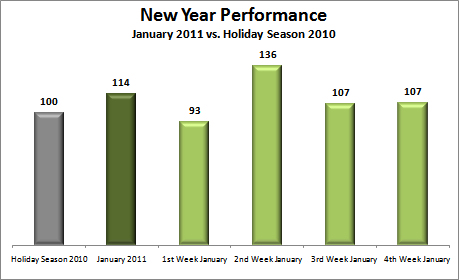 It’s no surprise that retail advertising accounts for the bulk of online ad dollars spent during the holiday season, but what about in January? What results can retailers expect after the hype of the holiday season is over?

Our data revealed that retail advertisers saw a 27% increase in CTRs during January 2011 compared to the 2010 holiday season baseline. This 27% increase represented a 13 percentage point increase over January’s overall improvement. 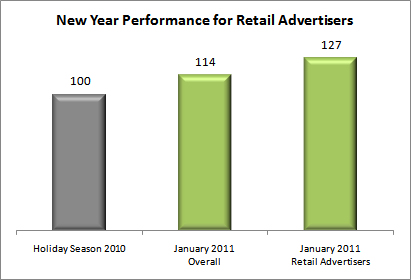 So what does this mean for retail advertisers?

Simple: It means that retail advertisers, or any brand looking for an early boost in the New Year, shouldn’t discount the prospects available in January. Although the holiday season may get all the attention, the New Year brings with it new opportunity to reach audiences and build brand equity online.

Shawn is responsible for conceptualizing and implementing first party research to support Undertone’s display, high impact and video advertising products in response to market needs. Additionally, he oversees advertising effectiveness research for top clients as well as pre-planning consumer insights. Shawn holds a Master of Science in Biomedical Sciences from Albany Medical College and a Bachelor of Science in Biology from The State University of New York at Albany.

Thank you! Your information has been submitted.